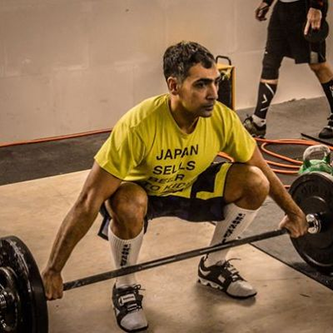 From the age of 12 until my late twenties I played competitive basketball complementing it with the traditional bodybuilding routine. When my knees forced me to give up basketball going to the gym became my sole physical activity and that for many years.

Two years ago while “You-tubing” I found a video of CrossFit, I was intrigued so decided to check on google if this was available in Geneva. That’s where I found CrossFit GVA. Free trial, fundamentals followed and a few classes later I was totally hooked.

The benefits and progress I experimented, the quality of the community and the fun I had during every class pushed my curiosity a bit further so in June 2013 I passed the CrossFit level1 certification.

Coaching came very naturally to me, when you find something so good as CrossFit,so enjoyable with so many beneficial side effects it’s natural to share it and to give others the opportunity to discover it too.

Turning 40 in 2014 and being possibly in the best shape of my life, being able to do things now that I couldn’t 20 years ago, being surrounded daily by amazing individuals that push and support themselves is a great reward of which I am thankful.