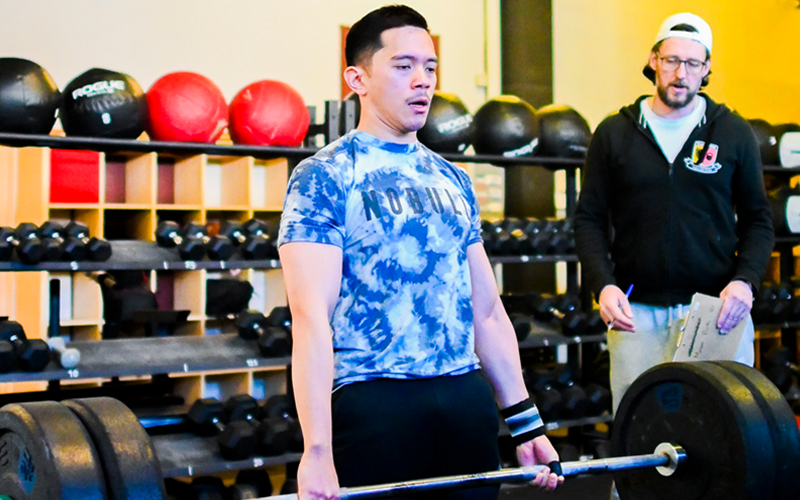 We are happy to share the inspiring #CrossFitStory of Abhar Ahmad diplomat at the Permanent Mission of Brunei Darussalam who has been training with us since 2021. Learn about his journey, his goals and what motivates him to stay at CrossFit GVA.

Abhar, can you introduce yourself in a few words?
I’m 30 years old (turning 31 this year) and from Brunei Darussalam, a very small country in Southeast Asia with a population of only 400,000. Some cities have more people than my own country as a whole! 😅 I’m relatively new to Geneva after moving here last summer. I’m working as a diplomat at the Permanent Mission of my country.

When did you start CrossFit and why?
I started CrossFit in 2017. Two of my older brothers were avid CrossFitters, so I decided to try the sport with them and fell in love with it after my first class!

Did you do any other sport before?
I used to play football during my teenage years and early 20s. I represented both my school and a semi-professional football club in my home country. We competed in tournaments around Southeast Asia.

What was your goal when you started? Have you reached it since?
My goal was to be able to do every CrossFit movement. Coming into my fifth year of CrossFit, I have not reached that goal yet but I’m still willing to learn. CrossFit doesn’t make it any easier for me because they introduce new movements every other year! 😂

What are your goals for this year?
I don’t have a specific goal for this year. For me, what’s important is to come to class everyday and enjoy!

What do you particularly like about CrossFit GVA?
Moving to a new country is difficult, especially after living in my home country all my life (except the 4 years in the United Kingdom during university). CrossFit GVA has made moving here a lot easier with its friendly and approachable coaches as well as members.

Have you gained confidence since you started CrossFit? Do you feel better in your body, have you developed your mind?
I wouldn’t use the word “confidence” because I feel I have a lot more to learn in the sport. But I would say CrossFit has helped me improve my “mental toughness”. CrossFit has taught me things I thought I wouldn’t be able to do before.

Do you have a great memory from the gym that you would like to share?
This has to be during the 3 weeks of Open 2022! I really enjoyed attempting the workouts together with the other members and supporting each other as a community.

What pushed you to do the Open?
It was my first Open where I was mentally healthy and did not worry about where I was on the leaderboard compared to everyone else. It turned out to be my best finish ever, and I actually qualified for the Quarterfinals in my region!

What would you say to someone who is hesitant to start CrossFit for fear of injury or not having the level?
Before I started CrossFit, I used to think it was only for elite-level athletes because of the heavy weights and complex movements. But CrossFit is actually for everyone! The movements can be scaled to everyone’s level of fitness and level of comfort. My advice is to just try it out, you will see results and that will bring you happiness.